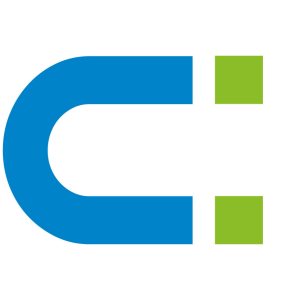 These days, it seems like just about everyone is on Facebook – curious parents, tech-savvy and not-so-tech-savvy grandparents, and kids who probably weren’t even walking on their own two feet when Facebook was invented. I even know a couple of dogs and a cat with Facebook profiles, although I’m not convinced that they set up their profiles themselves. Facebook has now reached 1.19 billion monthly active users! Add in the 15 million+ brand pages and you can see why it’s easy for your hotel’s Facebook posts to get lost in the frenzy of likes, shares, and posts that are endlessly pouring into users’ Newsfeeds. So, how do you get Facebook users to notice your hotel’s Facebook posts and engage with them? There are a number of ways to make your hotel’s Facebook posts stand out amidst the competition. Adding compelling visuals, shortening your posts, and targeting select times of day to publish your posts are some of the simplest ways to encourage your fans to engage with your hotel’s page.

1. Use A Powerful Photo

With 1 in 6 people using Facebook exclusively on mobile, it’s important to think about what content people will notice as they quickly scroll through their newsfeeds while waiting in line at Starbucks or on their morning commute to the office. Undoubtedly, pictures are more eye-catching than wordy posts. Images typically take up more space on the screen, and the brain also tends to process images more quickly than words. A picture tells a story in a glance and can usually be universally understood, while words require more time to read and process. Plus, understanding lengthy posts can be negatively impacted by language-barriers. As social media becomes more instantaneous with the advent of each new platform (from Twitter to Snapchat, to Vine) people are growing more impatient and less willing to take the time to read. So, it’s probably not a surprise to learn that photo posts on Facebook receive 39% more engagement than plain text, videos, or links; however posting just any old picture isn’t necessarily going to foster that much of an increase in engagement. A quality, engagement-provoking photo needs to have some sort of substance to it and preferably draw on a human emotion. Looking at Parade Magazine‘s “10 of the Most Liked Photos From 2012”, each photo evokes some type of emotion from happiness to pride to nostalgia. The screenshot below provides guests with interesting information about the hotel’s hometown and incorporates a visual of a tasty ice cream cone, which will appeal to nearly everyone. 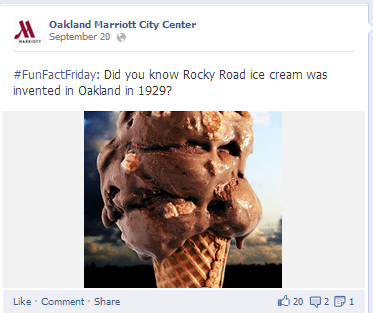 As a hotelier, you have the opportunity to evoke your fan’s emotions with photos taken on property. A number of travel inspiring photo opportunities can be found on your hotel property. For example, a fabulous view from a room or a delicious looking dish from your hotel’s restaurant. Photos of your hotel’s staff appreciation party or a sales team member of the month can also spark high engagement on Facebook because they allow Facebook fans to see the human side of your hotel and forge an emotional connection. As Meghan Biro says in her Forbes article “5 Warnings for Leaders: Brand Humanization is Not a Social Media Fad”, “These stories make your business interesting and compelling to consumers, employees, and investors…If you let people bring their humanity to your brand, they’ll also bring your brand into their networks. That’s a form of reach money can’t buy.” This screenshot below tells a beauitful story about the incredible team working at the lodge, which guests may not have been aware of otherwise. 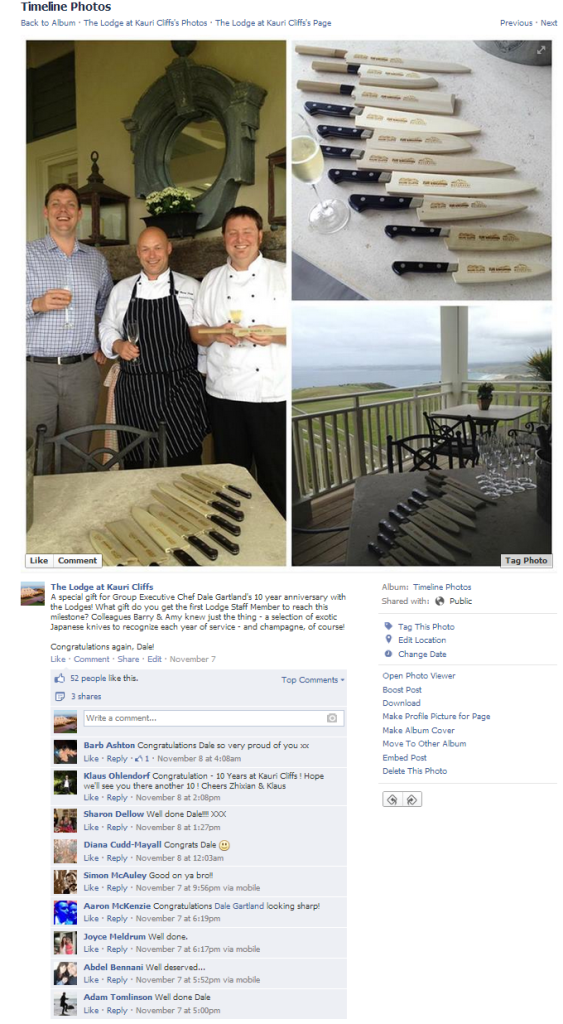 I’ve been told that you have six seconds to grab and hold someone’s attention on the Internet. On social media, six seconds is probably a generous amount of time. Don’t make Facebook users work to figure out what you’re posting about – give them all the information they need in one packet of information. As people are scrolling through their Newsfeed, they’re only going to stop for something that really interests them. A visual can convey so much without words, which is why using a photo is imperative, but oftentimes photos do need further explanation. Facebook allows page status updates to contain photos with nearly as many words as you like, but there is a positive correlation between shorter posts and high engagement, as demonstrated below.
The chart below, from Belle Beth Cooper’s blog post on Buffer, shows the amount of likes and comments per post, depending on post length. it is clear that posts from 0-70 characters are receiving many more likes and a few more comments than every other post length. In a close second are the 70-140 character posts, but beyond that the number of likes a post receives drops off significantly. While the number of comments received may hold steady throughout most of the chart, the large posts (231+ characters) have about half as many. 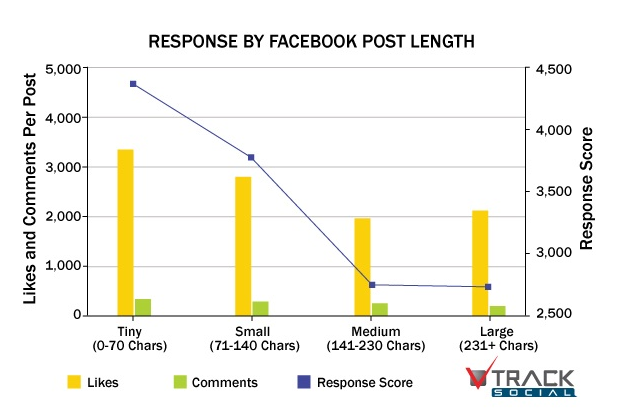 One easy way to cut down on your character count without losing important content is to use a link shortener like goo.gl or bit.ly. These programs take long URLs and shorten them. They are also customizable, so your link can act as a descriptor of the page it will direct to.
For example, here is the link to a Colorado Springs pet-friendly hotel page:

But when put into bit.ly and customized accordingly, the link can be shortened down to this:

The link is still informative, but it is now much shorter, saving you precious characters in your Facebook posts. As an added bonus, these link shortening tools will track how many people actually clicked your link as well as what day and time they clicked it. 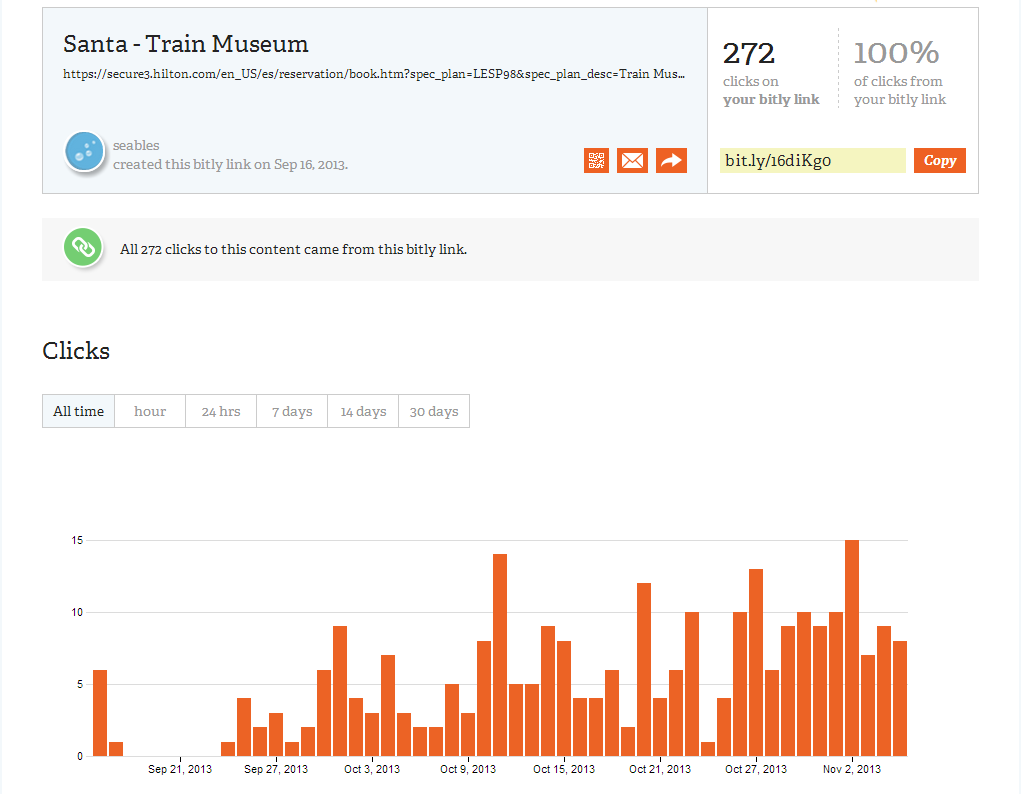 While it is important to keep your hotel’s posts short to maximize your engagement, it’s also important to make sure that the posts have substance to them. A Facebook page that posts nothing but fluff can end up looking spammy and cause fans to unfollow the page. With your hotel’s page, you have the opportunity to provide its Facebook fans with an insider’s look at your local area by posting informative content or sharing upcoming events. As many of your hotel’s fans are likely from out of town, they probably aren’t aware that the restaurant down the street has the best pizza in town, that the annual Pumpkin Festival is happening this weekend, or that the local aquarium is free every Tuesday. Try to think of your hotel’s Facebook page as a local guide for hotel guests – sharing valuable knowledge and expertise that will resonate with its fans.

It’s important to keep in mind that your hotel’s fans are probably not using Facebook 24/7. Certain times of day will prompt more engagement than others. It’s also important to note that a Facebook post’s lifespan is pretty short– 50% of engagement happens in just an hour and a half. Check your hotel’s Facebook Page Insights to get an idea of what times of day the majority of your fans are on Facebook. Catering your hotel’s content to those times of day will help increase interactions including likes, comments, and shares. Insights can also give you an idea of what day of the week your posts receive the most interaction. This knowledge allows you to schedule your hotel’s most important posts for days when its fans are most likely to see it and engage. 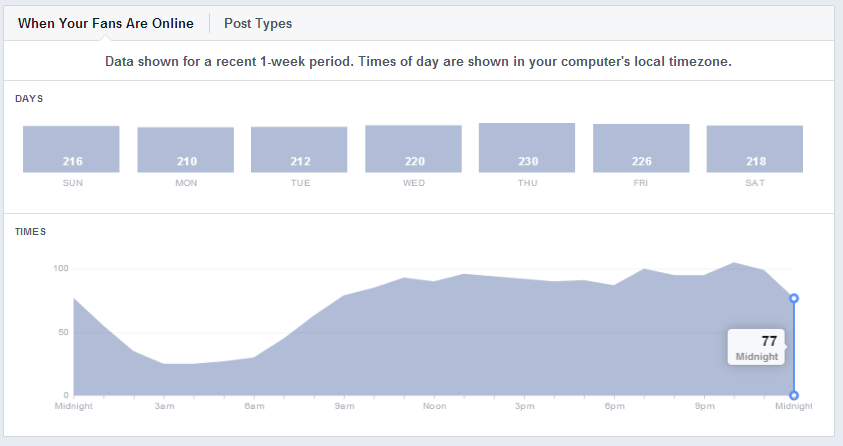 The above screenshot was taken from Facebook Insights and shows what times of day a particular hotel’s fans are using Facebook. Obviously, posting between 2 and 6 AM would not be a good choice for this hotel, but posting somewhere from 7 to 11 PM would be smart to ensure the post receives a high reach. There are two notable spikes around 7PM and 10PM that demonstrate the absolute best times to post for this particular hotel. Oftentimes, it takes several minutes for a post to filter its way into someone’s Newsfeed, so it may prove beneficial to post slightly (15-20 minutes) before the peak times.

4. Pin It To The Top Of Your Timeline

Facebook’s pinning feature is helpful for short-term specials or anything else you want to be sure your hotel’s fans see. Instead of having the post get pushed down with every subsequent post, a pinned post remains consistently at the top of your hotel’s timeline, giving the post a longer shelf-life. Fans will understand that the content is still relevant, even though it might be a few days old. Say you launch a new special offer on your hotel’s standalone website, and you want to start driving traffic to it. You can create a post announcing the promotion and pin it to the top of your hotel’s Facebook page. This way, even if someone visits the page days later, the first thing they will see is the post announcing the new special offer, which will bring it to their attention and maybe even encourage them to click for more information.
Pinning is simple — click the downward pointing arrow in the top right-hand corner of the post and select “Pin to Top,” the first option listed in the drop-down menu (see screenshot below). Pinning is especially helpful for special promotions running for a set length of time. Just be sure to remember to unpin the post when you no longer want it at the top, otherwise it will stay there for a full week. 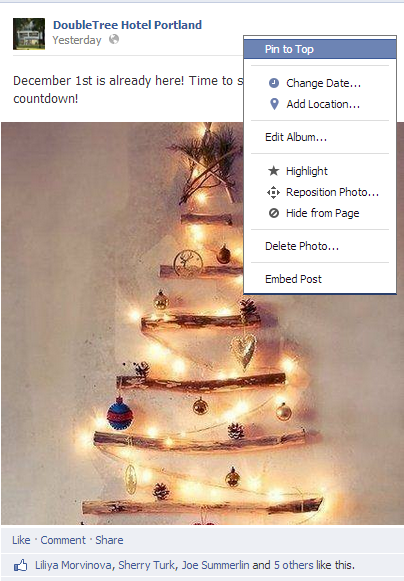 While it may be a challenge to track your hotel’s ROI from Facebook, it is still very important for your hotel’s online visibility to have an active and engaging Facebook page. Facebook allows you to promote your hotel and your area to potential guests on a channel where they are already spending their time. Following these four techniques will help extend the reach and improve the engagement on your Facebook posts. With a powerful photo and small amounts of text, you increase the chances that a Facebook user will stop to read (and like, comment, or share) your hotel’s post, further building their relationship with your hotel. Facebook posts with high levels of engagement also linger in users’ Newsfeeds longer than unpopular posts, thanks to Facebook’s story bumping. It is important to post relevant and interesting information because it leads to high engagement, which, in turn, ensures that your hotel is reaching as many of its fans as possible. Facebook is a great tool for hotels to use to maintain their relationships with guests, even when they are not visiting. That strengthened connection will help your hotel to remain top-of-mind, so when your fan does decide to take a trip down the road, they’ll remember to stay at your hotel.

PrevPreviousI’m an Independent Hotelier – Should I Upgrade to a TripAdvisor Business Listing to Take Advantage of the New TripAdvisor Connect?
NextTop 10 Tips for Hotels To Effectively Utilize FacebookNext
Share this post
Share on facebook
Share on twitter
Share on linkedin
Share on print
Share on email
"I wanted to let you know how much we appreciate your help. You are doing an amazing job and we’ve seen a huge increase of people recognizing our name and interacting with us due to our social media efforts."
Brittany StrosniderMilligan Events