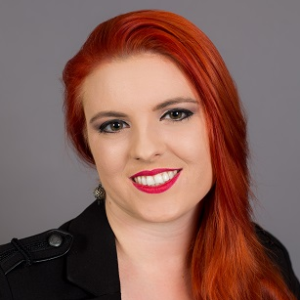 For one reason or another, a surprising number of hotels do not have the robust email subscriber lists they should, and hoteliers find themselves in a pickle of needing to double their email marketing lists immediately. Sometimes the hotel is brand new and must build a list from scratch, sometimes a hotel may have a list of event planners but is looking to grow their leisure traveler segment, and sometimes a hotel wants to purge their old pre-May 2018 lists and only use GDPR-compliant lists that subscribers have opted into. Whatever the reason, Blue Magnet developed a quick, tried-and-true solution to grow hotel email lists with the ease and speed hoteliers desire.

The solution is simple: hold a drawing for a free weekend giveaway on their website. To enter the drawing, users are asked to subscribe to your hotel’s newsletter. Then, using social media ads, targeted marketing pop-ups, and any other digital marketing tools at your hotel’s disposal, spread the word about the giveaway to both current and potential fans of the hotel. This way, your property gains a segmented, GDPR-compliant list of fresh email subscribers to market to in the years ahead, with an added bonus of gaining new social media fans. This method is easy and budget-friendly, especially when you work with a digital marketing company like Blue Magnet Interactive!

Want to see how it works? In this article, you will explore two separate case studies of how an airport hotel in Los Angeles and a skull-decorated hotel in New Orleans doubled their email subscribers in just one to two months.

Problem: How to Reach Fans of the Hotel?

There was a newly built airport hotel within walking distance of some of the most famous beaches in California. While the hotel was well-loved by both business and leisure guests and had thousands of fans on social media, the hotel only had an email list of 434 subscribers. There were more than 434 loyal fans of the hotel out there, and the hotel wanted to reach them.

Guests sign up for the newsletter on the website in exchange for entering a drawing to win a free weekend stay at the hotel in the upcoming year. The hotel gains subscribers, and subscribers gain the chance to win a free hotel room for a weekend.

The hotel offered one free weekend stay within the year of 2019 with the fine print conditions that black-out dates may apply.

Blue Magnet created a landing page on the website specifically for this giveaway. The page contained the following. 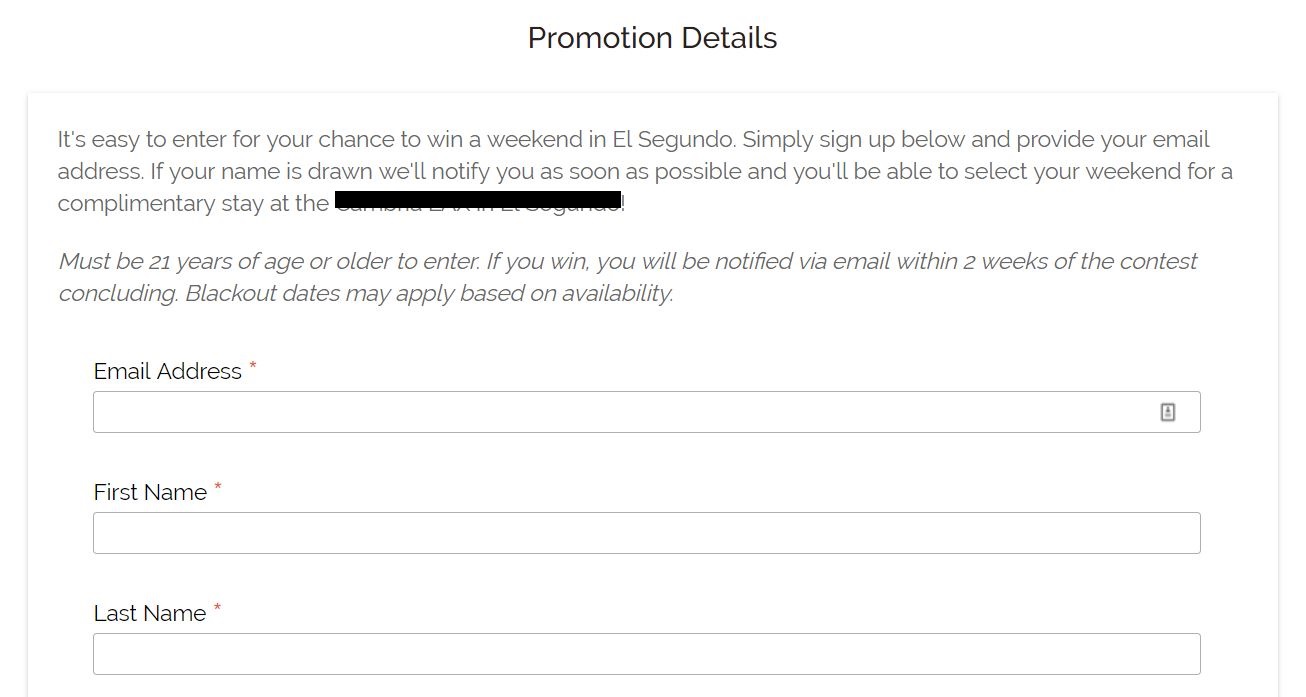 Next, Blue Magnet created a Facebook ad campaign to create awareness about the giveaway and encourage people to go to the site, subscribe, and enter to win a free stay.

Once the month was over, the hotel was so ecstatic with their new subscribers they wanted to run the contest again and see if they could gain any more. Blue Magnet ran the Facebook ad campaign for a second month, letting people know that the hotel was running a second giveaway and would pick one more winner.

The hotel team selected a winner from the list of new subscribers and reached out to them with the good news. With the winner’s permission, the hotel announced the winner on Facebook as a way to engage with their Page followers and generate hype for the second month.

Their first eBlast to their new list of subscribers yielded much more impressive results than they had previously experienced. Their eBlast was delivered to 1,183 people, opened by 158 people, and received 10 clicks to the website to explore the hotel and book a room if they saw fit. Only 21 people unsubscribed. 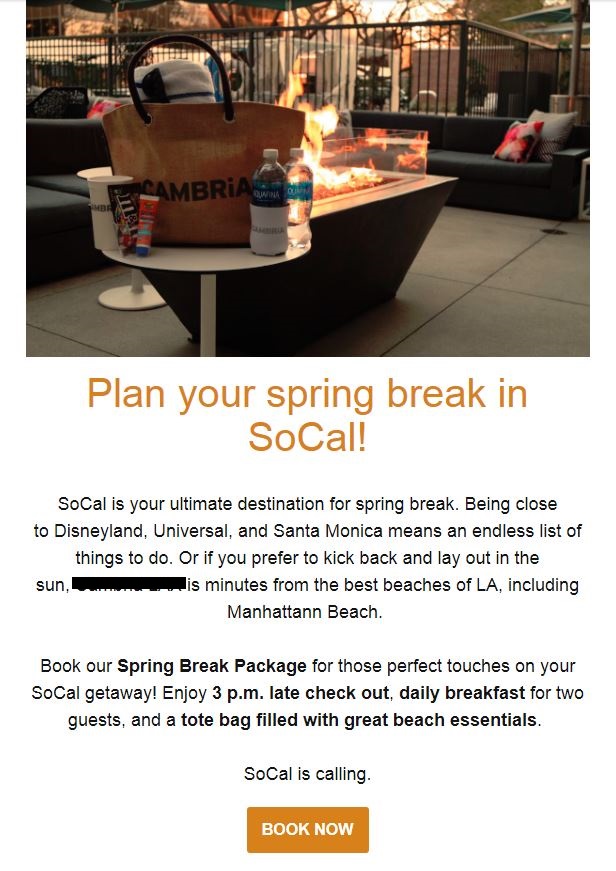 For comparison, their previous top-performing eBlast had been delivered to 191 people, opened by 46, and received 8 clicks. That’s a 243% Increase in people opening and reading their eblast!

And as a bonus side effect to the improvement in their email marketing efforts, the hotel’s social media presence improved dramatically as well. Over the course of the two months when the hotel ran the giveaway campaign, the Facebook Page gained 427 new followers, increasing their page followers from 2,336 to 2,763. That’s an 18% increase!

A few months later, the giveaway winner stayed at the hotel with her family, shared the photos of her trip with the hotel, and the Blue Magnet team posted them on Facebook to share the adventure with the hotel’s fans.

This helps build a good reputation for the hotel with the community. The hotel gave a free weekend to one lucky family who got a chance to make memories – what a great message to send to people in the community! It also turned that winner into an advocate for the hotel who took the liberty of sharing how close the hotel was to the beach.

This hotel was a new, artistically-decorated hotel in the heart of Nawlins that had gained the honor of being named the #1 Hotel in New Orleans by TripAdvisor, but had not built up an email list at all yet.

Blue Magnet worked with the hotel to design a shorter but very similar campaign to the one its sister property in LA ran just months before; however, our team gave it a little extra “juice” by promoting the giveaway though more channels to amplify the message.

Just like we had done for the hotel near LAX, Blue Magnet began by creating a fresh landing page for the campaign that included the giveaway terms and conditions, custom form to collect email addresses into a segment in MailChimp, a GDPR compliant checkbox for users to acknowledge they are signing up for the newsletter, and a back-up email to submit an entry to if a user cannot figure out the form.

The hotel built awareness about their giveaway through a social media campaign. Where they deviated from our last case study is they did not just amplify news of the giveaway on Facebook, they also did so on Instagram and Twitter. Additionally, they used a targeted marketing pop-up message on the website itself to make site visitors aware that if they sign up for the newsletter now, they could potentially win a free weekend stay. This our New Orleans client the opportunity to reach out and collect email addresses from individuals already showing an interest in their property to market to in the future. 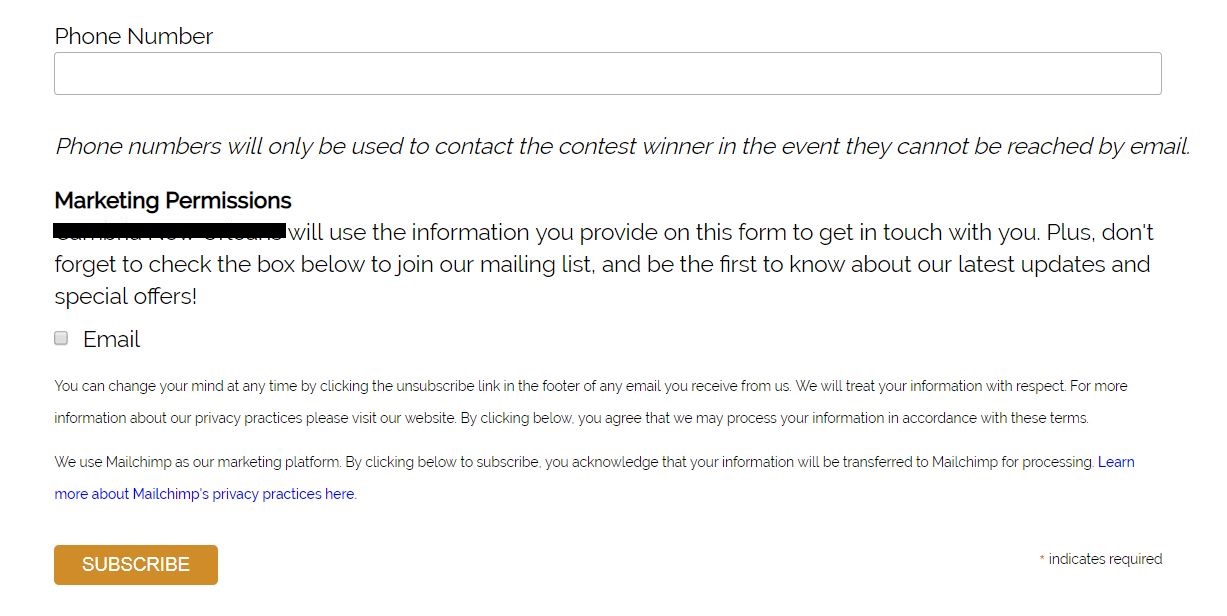 Before the hotel ran this giveaway campaign, it had 0 email subscribers. After running two back-to-back giveaway campaigns, amplified by social media and targeted marketing pop-ups, the hotel gained 838 subscribers of elite fans who want to keep up to date with the latest news and promotions going on at the hotel.

Their very first eBlast was sent out before the campaign finished running. The eBlast was sent to 631 people, opened by 85, and clicked on by five to explore the hotel website and book. That means the hotel captured the attention of 85 people it would not connect with otherwise, and five of those people were so intrigued they spent more time on the website to consider booking with the hotel! This was a great start to grow their email marketing efforts and they will only continue to grow it from here! 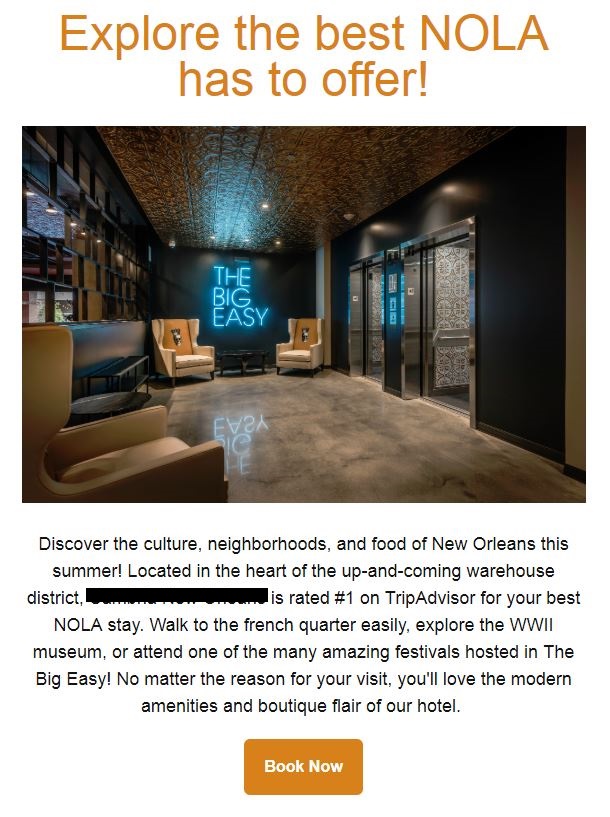 Zoottle: Another Solution to Bolstering Your Email Lists

Another way to grow your email list is to gain subscribers through Zootle. Zootle allows you to interact with your current hotel guests in a lot of ways, and one of those ways is through WiFi access parameters. If you have Zoottle, guests who login into the hotel’s WiFi is prompted with a message explaining that in order to utilize the free WiFi, they must enter their email and subscribe to the hotel’s newsletter in exchange. It is quick and painless for a guest to enter that information, and if they choose to unsubscribe at a later date, they can.

This is a great way to gain email subscribers from people who are already active with your hotel so you can market to them later on and build their loyalty and trust through elite offers.

No matter if your hotel has an email list of 0 or 10,000 subscribers, there are a lot of reasons you may need to grow your list quickly. There is a lot to take away from these two case studies, including that it is possible to gain over 800 new subscribers in one to two months with the proper incentive and a solid marketing strategy.

If you need to grow your email marketing efforts quickly and need some help, contact Blue Magnet’s dynamite team of experts. We would love to meet you and help you achieve your goals!

PrevPrevious10 Reasons Why Hotels Need a Video Marketing Agency In 2019
NextHow to Boost Your Email Subscribers Using Social MediaNext
Share this post
"I wanted to let you know how much we appreciate your help. You are doing an amazing job and we’ve seen a huge increase of people recognizing our name and interacting with us due to our social media efforts."
Brittany StrosniderMilligan Events