The Poconos Islands And The Persuasive Power Of Imagery 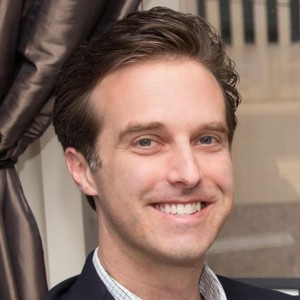 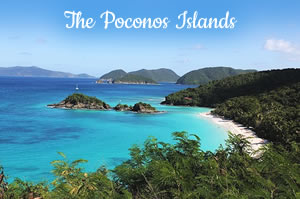 If you’ve never been to the beautiful Poconos Islands in the tropical turquoise waters of the Caribbean you should definitely add it to your list of top places in the world to visit. A tiny, undeveloped archipelago floating lazily off the northeastern coast of the Dominican Republic (see map below), The Poconos Islands are what most people envision when they dream of the quintessential beachfront paradise.
Yes, surely add it to your list of exotic, must-see destinations.  In fact, you can add it right up there with El Dorado, Shangri-La, Platform 9 3/4, the lost city of Atlantis, and any other mythical destination you had your heart set on.
Sadly, there are no Poconos Islands. But that photo above sure made you think twice, didn’t it?
For hoteliers, the message should be clear: the imagery on your hotel website serves as an incredibly persuasive tool for converting visitors into paying guests. When paired with a description of your property or a claim about your features and amenities, an image can actually enhance the perception of truth about that particular statement.

A recent study mentioned in Arstechnica highlights this very impact and image can have on “truthiness:”

The authors, based in New Zealand and Canada, performed an “alive or dead” test, showing the names of minor celebrities and asking undergraduates whether the person was still alive. In half the cases, they also showed a photo of the person. When the photo was present, people were more likely to answer that the statement was true.

The obvious explanation for this is that none of the photos were of a corpse, and seeing a person alive would almost certainly bias the participants toward thinking the person was alive. So, they switched the questions, asking another group whether they thought the person was dead. As it turned out, the photo also caused people to evaluate the statement as true, and answer that the person was no longer alive.

To make sure this didn’t only work with people, the authors switched to true/false trivia questions, like the macadamia example mentioned above. Again, photos (in this case, images of the subject of the question) caused people to answer “true” more often than they did in a control quiz. And it wasn’t just images. They could get a similar effect by reading a short description of the person in question. 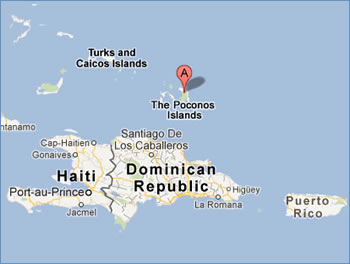 Imagery is incredibly persuasive.  In instances where even the most common of sense should prevail, imagery can cast doubt on your firmly held notions.  Take the introduction of the Poconos Islands above, for instance.  It’s pretty convincing when you see a legitimate-looking beach photo labeled “The Poconos Islands” or a map of the Caribbean featuring the mysterious island chain.  Still, you’re pretty sure you were always taught that the Poconos were a popular ski destination in mountainous eastern Pennsylvania.  …on the other hand, maybe there really are Poconos Islands somewhere out there.
While there really are no Poconos Islands, many years ago I created them.  Some coworkers were talking about their recent vacation in the Poconos and how great the skiing had been.  Having never been to the Poconos nor having known much about the destination, the name always sounded Caribbean to me, which seemed an unlikely place to go skiing.  It could be that I was simply confusing the Beach Boys’ island ballad “Kokomo” with the similarly sounding Pennsylvanian Mountain range.  Regardless, my followup question about skiing on some snow-capped Caribbean isle was met with a hearty round of laughter.  In retrospect, it really didn’t make sense to me either, but in my mind “The Poconos” could only exist as a name for an island.

The power of the picture

To save face I insisted that such an island did exist and that I was sure I could locate it on Google Maps.  So I went back to my desk, opened the Caribbean map in Photoshop, created a new island by cloning Cuba, and labeled it “The Poconos Islands.”  I emailed the altered map to my coworkers and then made my rounds to each office to witness their confusion firsthand. It turns out I received some head shakes of disbelief, an apology, and some exclaimations of frustration from those who simply couldn’t locate the fabricated islands on their own computer.  But even though my coworkers remained fairly skeptical, they had trouble refuting the altered map and eventually accepted the lie.  All because of an image.
These coworkers knew better, but the fact that they now had an image to support my erroneous claim caused them to abandon what they new for sure to be true (the Poconos of PA) for the uncertainty of a newly proposed fact (the Poconos of the Caribbean).

What hotels can learn from The Poconos Islands

I’m not suggesting that hoteliers should lie to customers about features of their hotel.  Instead, the Poconos Islands–while an extreme example–should remind us of the power of imagery to persuade.  Here are a few items for hoteliers to consider in managing their online presence:

In addition to images’ ability to enhance content’s truthiness, we’ve seen that photo gallery pages are consistently one of the top viewed pages on hotel websites.  We see the same engagement on social media channels, where imagery posted on our clients’ social networks always gets greater interaction than plain text status updates. When done right, professional photography can be an expensive investment but one that’s well worth it, especially considering how ubiquitous imagery is in the online travel world. Those photos can be used on your hotel website, OTAs, social media, menus, brochures, blogs, TripAdvisor and other third party sites, to further support your claims about your property.
So whether your hotel is in Aruba or Jamaica, Bermuda or Bahama, or anywhere else around the globe, when it comes to the the power of your hotel’s photography, just remember a little place called Poconos.

Key Largo, Montego, baby why don’t we go
Down to Poconos
We’ll get there fast
And then we’ll take it slow
That’s where we wanna go
Way down to Poconos.

PrevPreviousSocial Media ROI And Why Your Hotel May Be Focusing On The Wrong Return
NextTop Five Tips To Increase Your Hotel's Exposure On OTAsNext
Share this post
"I wanted to let you know how much we appreciate your help. You are doing an amazing job and we’ve seen a huge increase of people recognizing our name and interacting with us due to our social media efforts."
Brittany StrosniderMilligan Events