One Way to Increase Bookings During the Slow Season 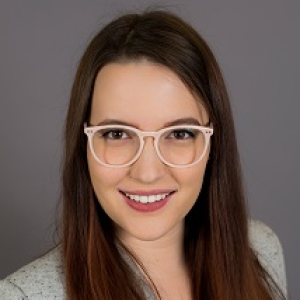 When the excitement of the holiday season has worn off, Chicagoans (and most midwesterners) are left to face the darkness of winter without the general air of cheer for a minimum of three more months. As a result, hotels in Chicago suffer their lowest occupancy rates during January, February, and the beginning of March according to a 2017 report by Choose Chicago.

Even with a great River North location, upscale amenities, and modern guest rooms, a boutique Chicago hotel could not control the weather and its resulting effects.

However, they could still control— and be strategic with—their marketing.

Our client, the boutique Chicago hotel, came to us with an idea to run a “Flash Friday” sale. This sale would run for 24 hours only during each Friday in December and offered 20% off bookings, valid exclusively for nights before March 15, 2018.

To maximize awareness, we chose to promote the flash sale on multiple channels where guests were already engaged (i.e. they had signed up for our email list or followed us on social media). This created a sense of exclusivity for the hotel’s email subscribers and social media followers—they were the first to know about the sale!

For this campaign, our team sent emails and posted about the offer on Facebook, and Twitter. Throughout all of our efforts, though we were always referencing the same sale, each mini-campaign took its own approach to promoting the sale.

The first email, Facebook post, and tweet focused on introducing the sale and its details. These were simple and straight to the point: guests can enjoy 20% off of their reservation if they book within the next 24 hours. 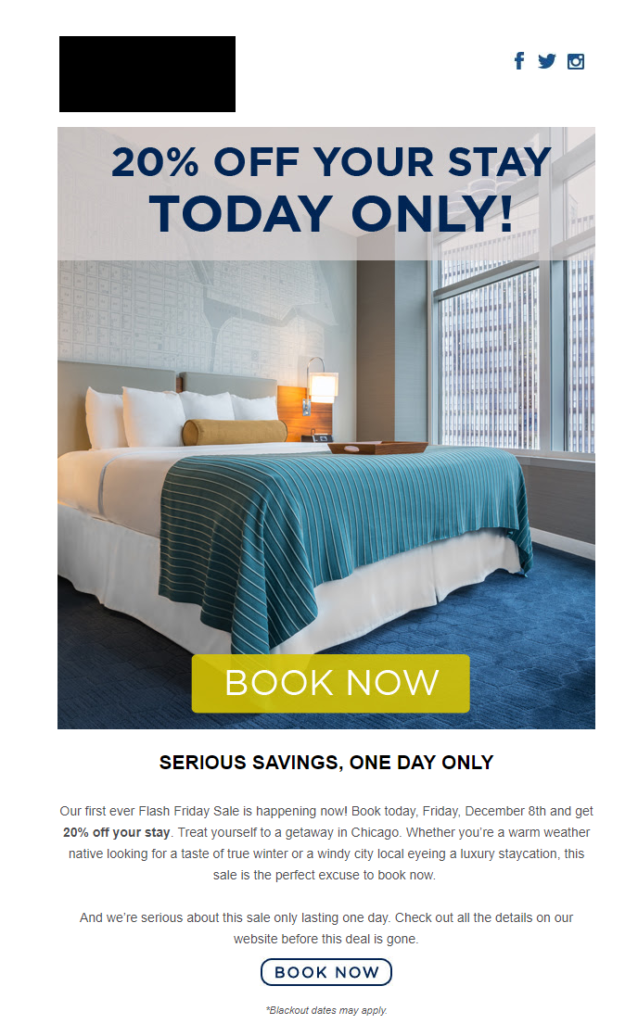 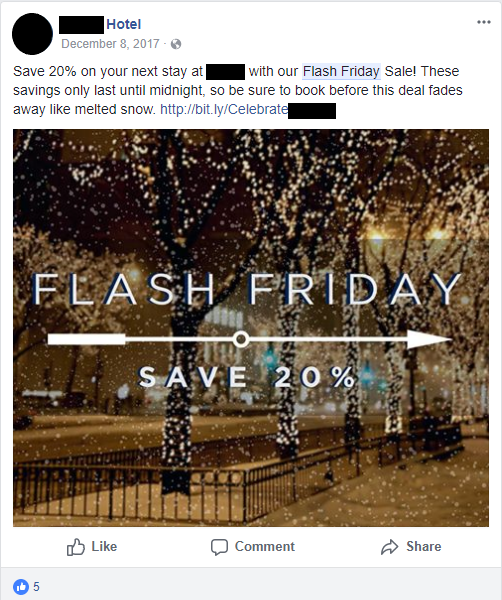 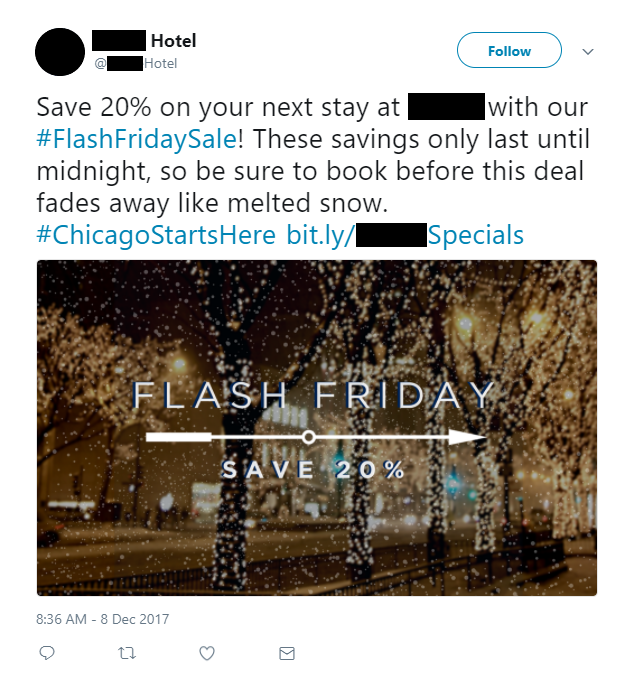 The second email, Facebook post, and tweet highlighted the holiday angle, since Christmas was getting closer. In the email, we included local Chicago events to highlight the hotel’s great location. On social media, we played up the money guests were saving that could be spent on holiday shopping instead! 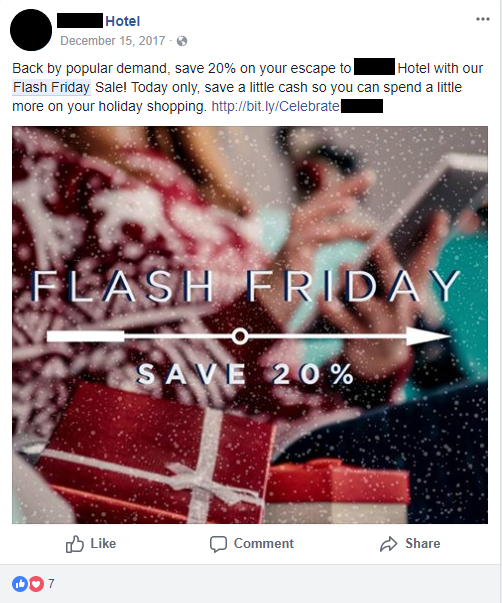 The third campaign was sent very close to Christmas knowing the holidays often bring a lot of stress in addition to the cheer, we decided to emphasize a “treat yourself” approach. The hotel was happy to offer an escape from the holiday craze! 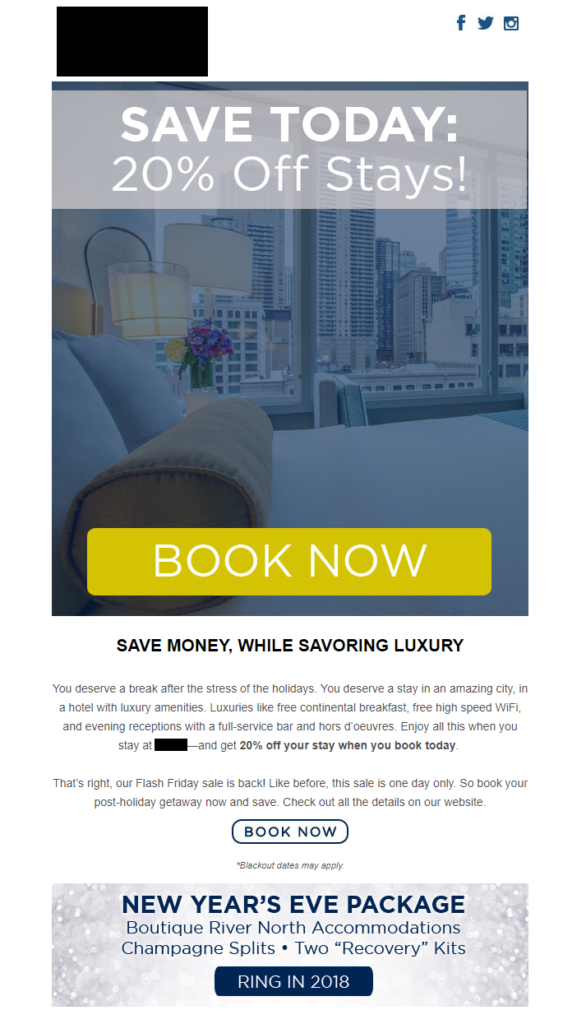 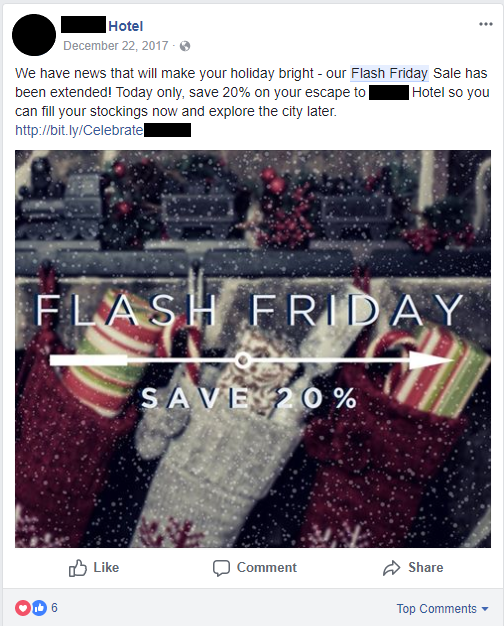 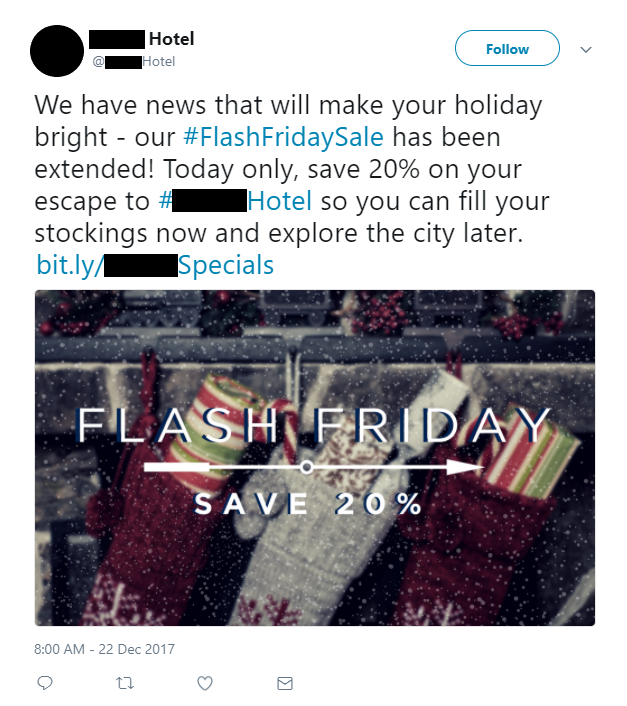 Sent after Christmas, the fourth email was themed around New Year’s. We included information about the New Year’s package in the email. On social, we touched on the ‘bucket list’ angle to entice guests. 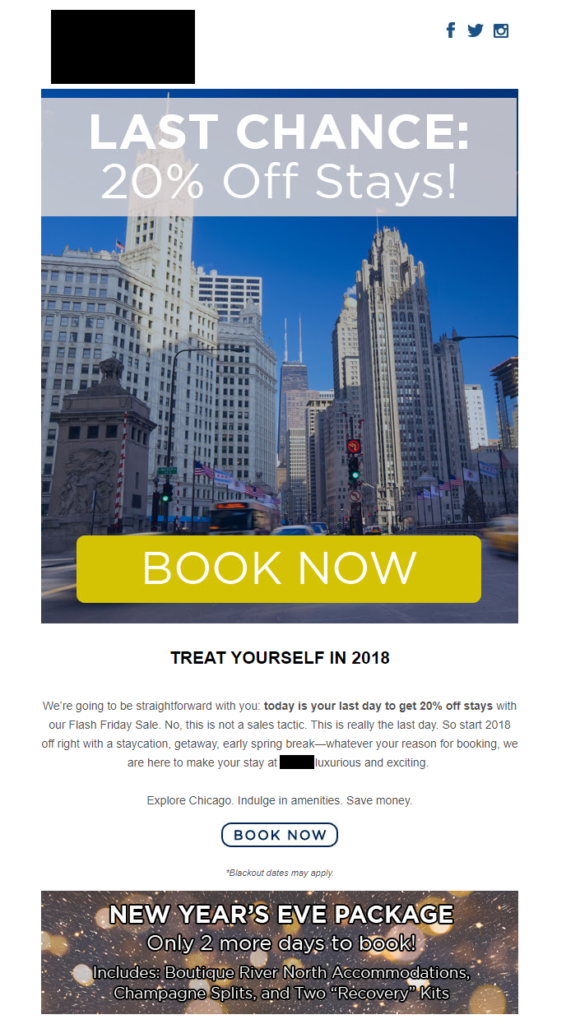 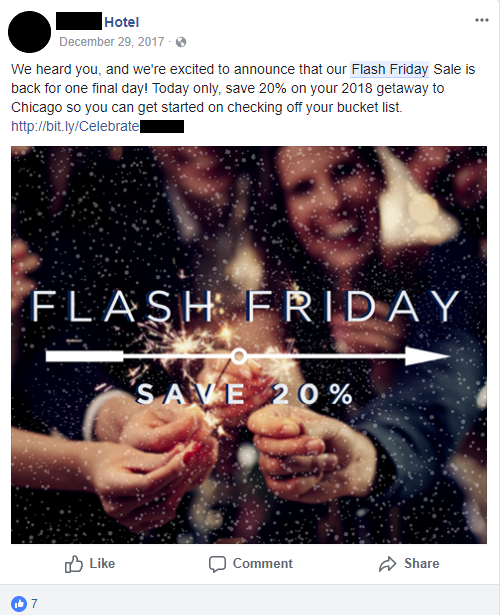 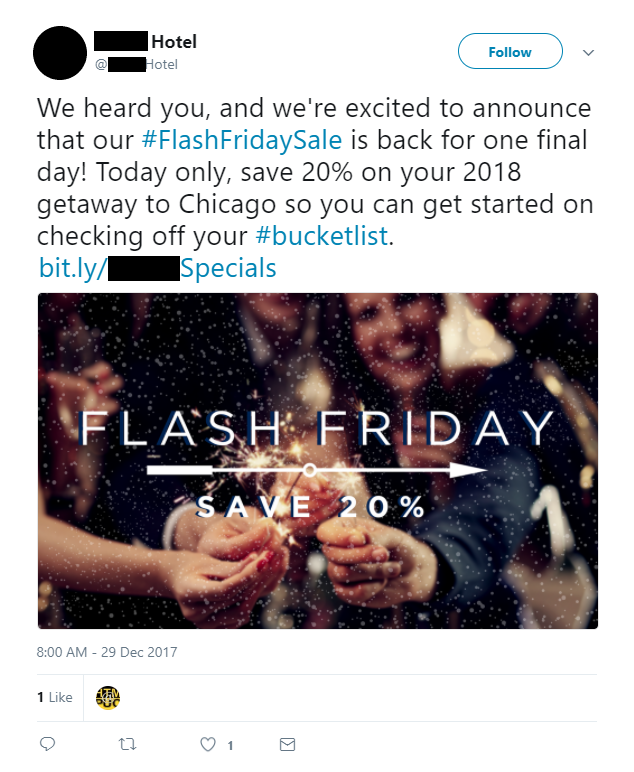 Our last campaign was sent after the new year, which gave us the opportunity to employ a ‘back by popular demand’ tactic since it had been a few weeks since the previous campaign. The timing of the email and tweet also allowed us to emphasize a common new year’s resolution to travel more! 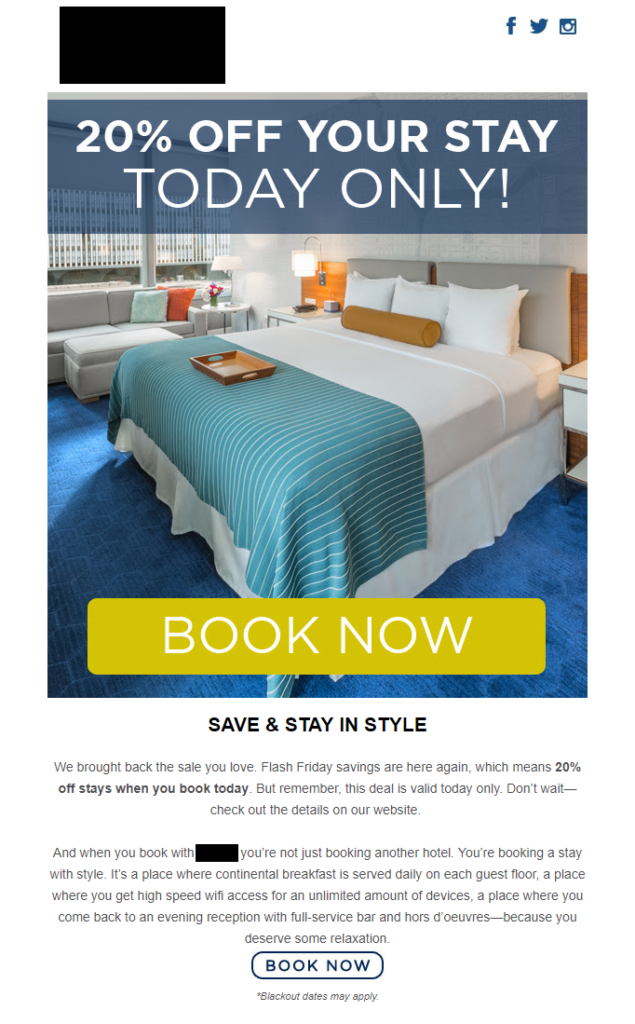 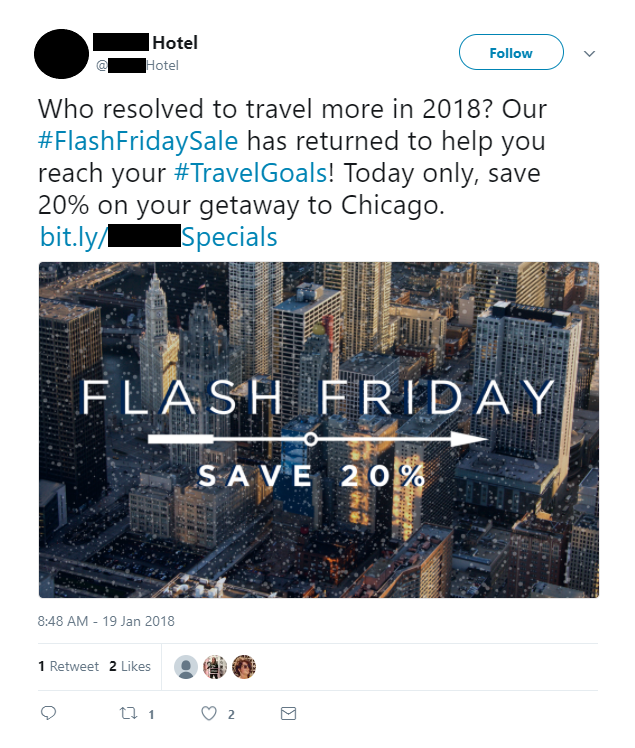 Let’s talk numbers. This campaign was a success for the hotel, and we have the stats to prove it!

*Numbers provided are based on data solely from the email campaigns’ direct connections!

What This Email Case Study Can Teach Us

Vary the way you talk about the same sale.

If you want to repeat a deal, make sure you add variance in the way you talk about it. While it is always important to keep the key details (like discount amount and the sale’s window) at the center of your messaging, explore ways to change up how you frame the information.

While there were multiple emails and social media posts centered around the same sale, they never sounded alike. Each one spoke with a unique viewpoint, connecting to current events like the holidays, common trends such as New Year’s resolutions, and even getting a little meta when referencing the popularity of the sale.

Keep the email short and sweet.

You should not have to convince your subscribers to check out your sale with an essay-length email. Speak directly to the guest in modern language: lay out the important points of your sale, highlight differentiating details of your hotel, and have a big shiny call to action button.

Do not make everything a package.

Clients often come to us pitching all kinds of package deals. While packages are great and often offer creative experiences (and therefore increase the possibility for media coverage), some guests just need a nice hotel room, without a personal parade or private chef. Having a balance of good old-fashioned sales and extraordinary packages can capture different audiences.

Every hotel is different and every campaign needs a different game plan. If you are struggling through a slow season, we would love to help you craft an exciting campaign of your own. Contact us so we can start talking strategy.

PrevPreviousHow to Best Work With Your Blue Magnet Interactive Support Team
NextHow to Live Stream on Facebook, Instagram, and TwitterNext
Share this post
"I wanted to let you know how much we appreciate your help. You are doing an amazing job and we’ve seen a huge increase of people recognizing our name and interacting with us due to our social media efforts."
Brittany StrosniderMilligan Events